Francis Robert Burton was born in London on 9 September 1840. He was the second son of the surgeon, Dr Richard Burton. The family emigrated to South Australia aboard the vessel, Jane, in 1852, settling in the suburb of Sturt. The Burton’s built ‘Bexley’ in Sturt.

Burton was well known in Adelaide for his efforts to stop juvenile delinquency. It was written of him in 1890;

“Mr Burton has devoted himself to the self-imposed task with the zeal and whole souledness of a thorough philanthropist, coaxing boys away from idle habits and evil associations into the line of industry, honesty, and truth, not by ordinary mean, but by force of genuine attraction. Kindly by nature, he inspires confidence in boys of a class rendered suspicious of the motives of others by their own experience of deceptive ways. Surely My Burton will yet receive for his scheme the recognition it deserves, for with every boy he rescues from vicious courses and plants firmly on the path of duty, the State gains a useful embryo citizen.”[2]

While living in Wallaroo, Burton was inspired to open a youth’s recreation room, with the intention of taking boys off the street and giving them books to read and games to play to pass the time.
In 1888, Burton opened his private boys’ reformatory at Glanville.

[1] Dolling, Alison, The history of Marion on the Sturt: the story of a changing landscape and its people, (Frewville, S. Aust., 1981). 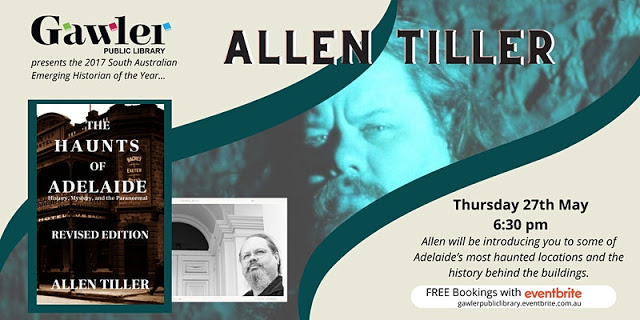 Allen Tiller at the Gawler Library

Thursday 27th May
6:30 pm
Join Allen Tiller, one of Australia’s leading paranormal historian’s, as he introduces you to The Haunts of Adelaide.

This second edition of The Haunts of Adelaide has been completely rewritten with extra historical facts, footnoting, an index, more photos, and most importantly, more ghost stories!

Allen will be discussing some of Adelaide’s most haunted locations and the history behind the buildings, the people, the urban legends and the ghosts that haunt Adelaide and its suburbs.

Allen was the recipient of the History Council of South Australia’s Emerging Historian of the Year Award 2017, and has also featured on the paranormal reality television show Haunting: Australia. He is a respected historian, paranormal researcher, author, poet, and the founder of Eidolon Paranormal, S.A. Paranormal, and The Haunts of Adelaide.

Allen will have books available for sale on the night.

The vessel Cardigan Castle was an iron ship (later barque) owned by Liverpool shipping company, Lewis, Davies, and Co. The vessel was built during 1870 by R.J. Evans.  Between 1879 and 1897 the ship transported people and cargo between England, Australia and New Zealand. It stopped in South Australia at Port Adelaide, Port Pirie, and Port Victoria (Yorke Peninsula). In 1893 the ship was sold to L. Davies and Co. and converted to an iron barque.
In 1909, the Cardigan Castle was lost off the West Australian coast.[1]

You may remember in a previous blog regarding John Martin, Mr Burton discussed his desire to go to sea. Mr Burton had asked a judge if this were possible for the young man, and the judge had given his blessing.
Burton and the Judge were true to their word. They arranged through Mr Philipps of Wills and Co., for Martin to board the vessel Cardigan Castle, under the instruction of Captain Golding. Martin left Port Adelaide on Wednesday, December 4, 1894, bound for England.[2]

The South Australian Register published a short letter from Mr Burton in May 1895 regarding a letter sent by Captain Golding. In the statement, Captain Golding stated that Martin had conducted himself so well on the voyage that the Captain has re-engaged him for a trip from London to Calcutta, India. Captain Golding stated, “The improvement in the boy\’s conduct goes far to justify the generous estimate formed of his character by his erstwhile guarding, Mr Burton.”[3]

Friday 2nd November 1894, and 15-year-old John Henry Martin has flown the coop again. This time Martin escaped from Mr Burton’s truant school at Glanville. He had been locked in a room and escaped. His escape had only been discovered when someone had sought him to do some work, finding the locked room he was supposed to be in, empty.[1]

The Port Adelaide police were notified of Martin’s disappearance, with word put out on the street that they were searching for him. At about 10:30pm that night, a message was sent to the police station stating that Martin was seen laying on tracks at the Port Adelaide railway yards.
Constable Schell went to investigate and found then arrested Martin. Martin was no longer dressed in his reformatory uniform, instead, wearing clothes he had borrowed from another boy. He was wearing blue serge trousers and a tweed vest, missing his hat, work coat and one boot. When asked by police why he changed clothing, he stated, “I’m not going to let anyone see me with a uniform coat on.\” (referring to the reformatory uniform).
Martin was taken to the Port Adelaide police station and put in the cells, all the while protesting vigorously that he had done nothing wrong and did not deserve to be locked up.
Mr Burton, who had taken charge of the boy, decided that he, and his reformatory, would no longer accept the boy and that he should be placed back into State care. [2]

Saturday 16 September 1894, John Martin escaped yet again from Mr Burton\’s Glanville Reformatory, this time with two other lads, Patrick Quigley, and Patrick MacCabe. The boys had made it on foot from Glanville to Manoora. They had been spotted near Saddleworth. The Kapunda Mounted Police were notified and set off after them, arresting the boys on Monday afternoon.
The three lads were sent by train back to Port Adelaide. Mr F. R. Burton, warden of the Glanville Reformatory offered his opinion that Martin’s escape had been influenced by others. He expressed his opinion in The Observer newspaper.

\”He ran away three or four days after I got him last April,\” Mr. Burton said, \”and when he was brought back he was kept under strict surveillance for a time, but for the last three months be has had full liberty, and if he had had an idea of going, he could have disappeared at any time.
I offered to get him a situation, but he preferred to stay with me. About a week or so before he disappeared be expressed a wish to go to sea, and when I told him that I would get a ship for him to go to England and got the Judge\’s approval of my action he was quite pleased. No doubt the boy has been enticed away.
It is rather annoying after struggling with him for months and seeing the end in view for someone to step in and spoil the work. A sea life is the only life for him. He is too impulsive and is too easily led away. There is not much gratitude in boys nowadays—there are very few cases of it. I do not look for it. I was surprised the way the boy has behaved, and I am sure he deserves credit for it. I\’ll give you an instance where he could have got away if he had wanted to do so. On the last public holiday, September 3, I took my boys down the river, and allowed each, in turn, to have a paddle in the canoe that I have there. If he had wanted to get away, he could easily have landed on the other side of the river and got a good two-hours\’ start of any search party.

I don\’t know yet what the police will do. I would take him back. I have never given a boy up yet, and if he comes back to me, I shall carry out my intention of sending him to sea, as the Judge approved of my idea.\”[1]

The boys when captured at Manoora had in their possession two greyhounds that belonged to W.J. Oliver of Norwood. Mr Oliver declined to press charges against the boys, perhaps out of fear of retaliation. Martin was returned to the care of Mr Burton at the Glanville Reformatory.[2]
Originally Martin had been sentenced to State Children’s Department on Flinder’s Street then sent to the Industrial School, then Mr Burton’s Glanville Reformatory. All up, he had escaped 16 times, earning him the reputation of, “a cunning, daring and skilful escape artist’.

A journalist for the Express and Telegraph went as far as writing;

“Some of his escapes from the Reformatory were accomplished in such a daring and skilful way that many people would have preferred to see the youth pardoned and assisted into some honest situation as the regard for his extraordinary pluck than hunted by the officials and returned to the State home which he so greatly abhors.”[3]

John Martin became well known in Adelaide for his constant escapes from the Industrial School and Glanville Reformatory. His escapades became legendary and earned him celebrity status in Adelaide.
When writing of his escapes, the 15-year-old (14 at the start of his crime spree) was often described with words exemplifying his actions, rather than vilifying him, as would have been done if he was an adult. ‘Pluck and determination’ were often used to describe him, and, ‘courageous, fearless, and brave’.

The Express and Telegraph newspaper published one of his escapes. In the middle of the night, Martin awoke in his third-floor dormitory. While everyone else was asleep, he quietly drifted through the room, opened a window, and stepped out onto an 8-inch (20cm) ledge protruding from the wall. He was 40 feet (12 meters) above the ground. Martin, quietly, without fear, moved along the ledge until he reached a water pipe, which he slid down to reach the ground.

He was captured after three days. On his return to the reformatory, he was shackled with ‘school-irons’, a leather and iron shackle designed to hobble the wearer. The irons were chained to the bed, and a warder was assigned to stay in the room the entire night.
On one occasion, Martin waited for the warder to fall asleep. He found a way to quieten his shackles, and snuck over the warder, removing the keys from his pocket, and unlocked himself. Again, he snuck out the window onto the ledge and used the waterpipe to escape to the ground.

On another occasion, Martin was segregated into an isolation chamber that the superintendent thought inescapable. The only things in the room with Martin were his blanket and bed. Martin was put in the chamber, and the warders left to their rooms. The following morning, Martin was nowhere to be seen,
As soon as the warders had left him, Martin bit the metal buttons off his trousers. He used the buttons as screwdrivers and removed the lock from the door, from the inside! He escaped into a courtyard, where he escaped over the wall.
Unfortunately for Martin, his notoriety meant he was easily recognised and was arrested soon after his escape. [1]