John Paterson McGowan was a South Australian born pioneer in Hollywood. Born in Terowie, South Australia, John was known professionally as J.P McGowan and acted in over 235 movies. He also directed 257 movies, wrote 31 movies and produced with his company, ‘Signal Film’ 22 movies.
McGowan is the only Australian life member of the Screen Directors Guild.
McGowan was born on  February 24, 1880, in the mid-north town of Terowie. His father worked on the trains there, but the family soon moved south to Islington to the railyards where his father worked as a locomotive fire-stoker and labourer.
McGowan fought in South Africa during the Boer War, and from here was plucked to work in films in America. His first film appearance was in a 1910 silent movie called ‘A Lad From Old Ireland’. McGowan worked for Kalem Studios at this time and went on to star in and direct 33 episodes of the serial adventure movies series ‘The Hazards of Helen’.
McGowan married Helen Holmes, and together they started their own production company ‘Signal 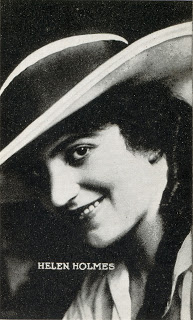 Films’. They had one child together before their relationship fizzled out. They divorced in 1925.

In his later career, McGowan directed John Wayne in The Hurricane Express, a 12-movie series produced by Mascot Pictures.
McGowan served as the executive secretary to the Screen Directors Guild from 1938 until 1951 (known later as the Directors Guild of America).
McGowan suffered from heart disease in his later years. He died on 26 March 1952, Hollywood, Los Angeles, California, United States. His ashes were interred in a niche at Forest Lawn Memorial Park, California.
J.P. McGowan impressive resume on IMDB; https://www.imdb.com/name/nm0569645/
Researched and written by Allen Tiller © 2019
Bibliography