The White Ghost of Port Wakefield 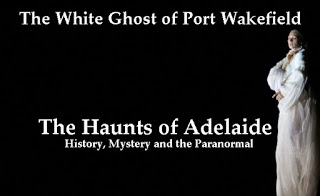 Last week I featured a story about the Grey Ghost of Port Wakefield and how it may, or may not have actually been a grey horse terrorising the local community. Just a week after the grey ghost caused fear and pandemonium, another ghost story popped up in Port Wakefield.
It was a hot summer night, and in the newer part of Port Wakefield, a lady was walking around her yard as she could not sleep. She checked her garden, and a newly stacked pile of wood delivered that day.
As she glanced over at the wood she noticed a man stealing smaller logs and putting them in his bag. She let out a small scream, startling the man.
The man, who had not noticed her previously, looked up to see a woman dressed in white, glowing in the full moonlight, with wide eyes, and open mouth who was letting out a scream. Shocked and scared, he turned and ran. He bolted without looking where he was going and ran straight into an iron fence, rebounded so hard, he flung back into the wall of the stone wash house and fell inside. In a panic at the ghost he had just witnessed, he kicked the washing copper over and sent dust and ashes everywhere from the fire pit used to heat it. He managed to stand up, and then jumped through a window, collided with a wheelbarrow then fell into a heap after rolling across the lawn.
The ladies small dog attacked the man, who suddenly stood up, trouser-less, and fled into the night, the dog tore the trousers, and a well worn left behind slipper, to pieces. The woman, who had regained her composure, reported the incident to police the following morning.
Researched and written by Allen Tiller © 2019